Last week I was finally able to go to the cinema and watch Godzilla, the movie I’ve been looking forward to the most in 2014 since I found out it was in production a couple of years ago. I’m not exactly a fan of Godzilla but I do quite like it; and after the failed 1998 adaptation —which has its particular charm but it’s NOT Godzilla— I was left with the desire to watch a movie that would do justice to the monster, that would give the God back to that domesticated Zilla from TriStar.

It was for this reason that when I learned of Legendary Pictures’ intentions to produce a new version more faithful to the original, I decided that I couldn’t miss it no matter what, although I had to watch it in 3D to enjoy it in all its splendor, and due to scheduling issues with the 3D screenings I hadn’t been able to go until the last week, when it was about to be removed from theaters.

My opinion after finally watching the movie can be summed up with “Oh my God, this is GOD-Zilla”. I really loved the film, I enjoyed every moment of its little more than two hours as a 10-year-old boy that fulfills his dream of seeing his favorite monster on the big screen would have done.

If I were to criticize the film from an objective point of view, I’d have to say that it’s not entirely good; but I don’t see why the urge to be so rigorous in terms of performances, solidity of the script, dialogues, and that stuff when you know from the beginning that when you go to a movie like this, you aren’t going to see masterful and moving performances with deep scripts. When you go watch a monster movie, what you’re going to see is the monsters; or more specifically, monsters, destruction, action, and special effects. Human characters, although in some rare cases can give the occasional surprise, are usually only there to fill in footage (although it was certainly a shame the tremendous waste of Bryan Cranston’s character).

Seen from this perspective, it must be recognized that Godzilla fulfills its mission: it’s very exciting, even quite scary, nothing to do with the friendly Zilla from 16 years ago. I loved the “deification” that was given to the monsters (yes, that GOD I was expecting came back) presenting them as insanely gigantic and powerful beings; the design of both the Mutos (the monsters that fight Godzilla) and Godzilla himself (which was the first thing I loved about the trailers); the photography of the scenes with that apocalyptic tone, as if taken out of a nightmare; and the camera play to achieve that during most of the action scenes you’d put yourself in the eyes of the characters, as if you were in the middle of the battlefield witnessing those beasts fighting in front of you.

If we add all this to the effect of 3D, the result was simply impressive. It was a far better experience than I imagined. Even a girl who was in the theater had a panic attack in the middle of the movie. If you didn’t watch Godzilla in 3D, you didn’t really see the magnitude of this film. Update: a few days after writing this I went to the cinema to watch the movie again, now without 3D, and I can factually confirm that there’s a Godzillian-size difference between the two versions.

I’d like to mention also that although the Mutos appear much more than Godzilla himself, they’re very well accomplished villains and aren’t boring at all; on the contrary, they become truly scary. Their design so little “earthly”, between insectoid and alien (they remind me a lot of the tripods from Steven Spielberg’s adaptation of The War of the Worlds), and its practical invincibility, awaken that fiber of terror so necessary for a good monster movie. And they not only pay off in this regard but in the most important aspect: giving Godzilla a decent fight. This movie fits perfectly into the Japanese-style kaiju battles fans have been waiting for.

Although it’s not important, I also liked some nods I detected in the film towards Toho’s Godzilla, such as the mention that the monster was seen for the first time in 1954 (year of the release of the original Godzilla film); the inclusion of a “Sherizawa” in the cast (the Japanese guy who says the famous phrase “Let them fight” and who spends the entire film with a WTF face, based on one of the main characters from the original film); or the fact that Godzilla was called “King of the Monsters”, which is his actual epithet and the title of another of the old films.

In conclusion, this Godzilla from 2014 is Godzilla with all the letters, a tribute worthy of the 60th anniversary of the monster, and not like the iguana from 1998. Let’s hope that the second and third parts, already confirmed, satisfy in the same way, and see if by any chance they give us a King Ghidorah. 😉 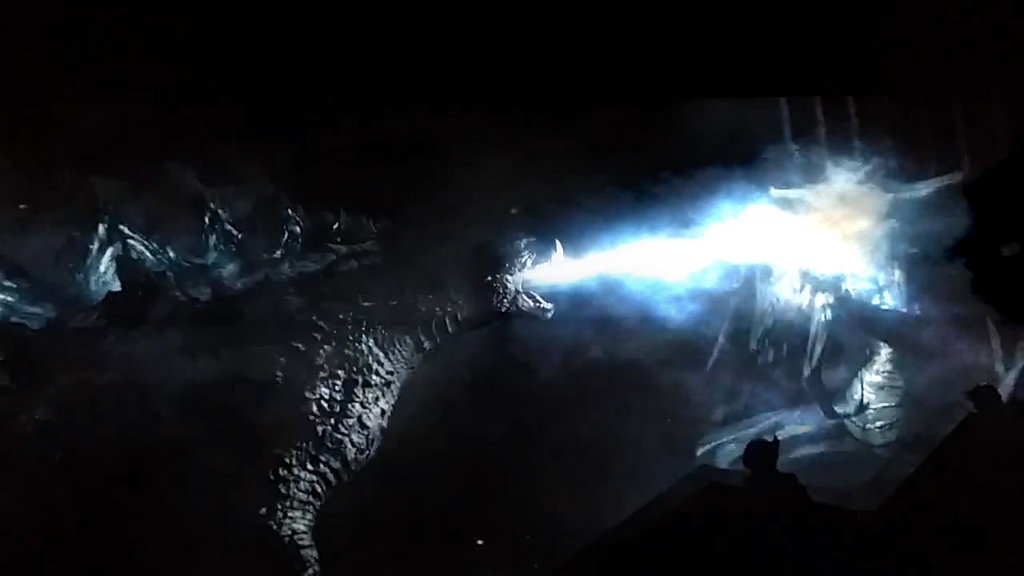